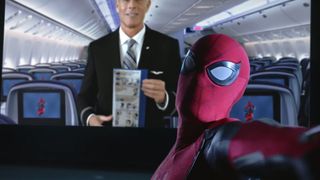 Spider-Man: Far From Home is out next month and United Airlines has gone all in, making a Spidey-centric inflight safety video and amenity kit so you can “fly like a superhero.”

Does Peter Parker don a Spider-Man sleeping mask and matching socks? United Airlines seems to think so. The kit also includes tissues and a special Spider-Man carrier bag. Check it out below.

In the upcoming movie, the last of the MCU’s third phase, we see Peter Parker (Tom Holland) as he vacations in Europe with friends. United has used the travel connection to spice up its safety video.

The video is packed with references to Marvel, including a framed photo of Stan Lee in the opening deli scene. Watch the video above and see how many you can spot while brushing up on your flight safety.

According to One Mile at a Time, “United notes that the safety video not only features real employees but also features MileagePlus members who bid miles for the opportunity to appear in the video. There are also appearances from members of the movie’s cast.”

What the ‘Spider-Man: Far From Home’ Post-Credits Scenes Mean for the MCU (Spoilers)
MoviessponsoredJune 21, 2019

Work From Home
20 PS4 Games You Should Probably Beat Before PS5 Arrives
LifestylesponsoredMarch 9, 2020
What To Read Next
Load More
Search Results
Load More