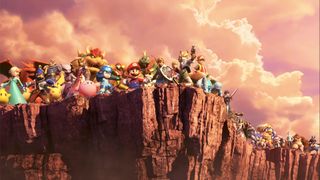 Super Smash Bros. Ultimate for the Nintendo Switch is already the best-selling game on Amazon, even before the title’s official release on December 7.

Earlier today, another Nintendo Direct event was held, focusing on the highly-anticipated game once more, which follows its previous Direct broadcast in August and introduced five new fighters and a whopping 103 stages. Additionally, a new trailer of the game was released, showcasing a hint of the backstory for the game’s new story mode dubbed, “World of Light.”

The four-minute cinematic clip displays a ton of fan-favorite Nintendo characters in a deserted landscape like Super Mario, Starfox and more, as they battle it out against a barrage of Master Hands, (the game’s boss) which then transforms into an impressive light show, eventually grasping every character and their spirit, with Kirby as the lone survivor.

Additionally, a featured song as well as an overview of the world map of the game are highlighted. The game’s creator Masahiro Sakurai said he wants to keep the new adventure mode a secret until the game launches, but the trailer hints that you’ll have to battle the evil spirit characters over the course of the World of Light campaign in order to save everyone.

For more, you can watch the entire Nintendo Direct event below.

Also, in case you missed it, the ‘Super Smash Bros. Ultimate’ bundle includes a GameCube controller.