With images of watchmakers toiling away at work benches in Switzerland, and the calm and conservative vibe found inside your average luxury watch boutique, the world of watches typically isn’t a place you’d expect associated with scandalous behavior. But you’d be surprised. You’re still looking at a segment of the luxury goods marketplace, and when high value items are a part of any equation, there’s opportunity for things to go awry.

Theft, fraud, and other generally shady dealings aren’t necessarily commonplace, but when instances of scandal have occurred they tend to unravel in surprising and occasionally newsworthy fashion. Here are just a few examples of some of the strange happenings to strike the watch industry in recent years.

1. The Disappearing Watch of Russian Patriarch Kirill I

Several years ago the Russian Orthodox Church came under fire as it was discovered that they had blatantly photoshopped a $30,000 Breguet watch off of their leading Patriach Kirill I in official press conference imagery. It’s likely they would have gotten away with it too, if not for the reflection of the timepiece in the glossy table that Kirill I was seated at.

This was not the first time that Russian officials had been spotted wearing wristwatches whose value exceed their annual salaries, and with the Russian Orthodox Church having maneuvered its way to a fairly high position of power and importance (and having publicly backed Putin in his 2012 election), this display of wealth raised plenty of concern. What’s more, before the photo doctoring came to light, Kirill I made several public statements denying the existence of the watch entirely.

Executing the robberies in broad daylight, the crew rolled up on scooters wearing helmets with blacked-out visors, and wielding machetes. Often times they used one of the scooters as a battering ram to breach the doors — as many luxury watch boutiques require clients to be buzzed in for access. Large sledgehammers (and often a scooter or two) were left behind at the scene, but thankfully no one has ever been attacked during one of these altercations. That said, in June 2018 a plainclothes police officer did manage to tackle one of the participants as he attempted to flee the scene.

Today we start with the #iconicman series post, featuring every Friday a person that shaped our culture’s style in its own way. ———————————————————— The first one couldn’t be anyone else but Mr. Steve McQueen, "The King of Cool", he was the ultimate man's man. From humble beginnings and a troubled childhood, McQueen rose to heights of fame that few others have achieved. Here sporting a @rolex Submariner 5512. ——————————————————— #atelierdelsur #rolexexplorer #rolex5512 #5512#menstyle #iconicmen#icon#iconic#vintagelifestyle #vintagelife #classicmen #meninstyle #stevemcqueen #mcqueen #stevemcqueenrolex

When Phillips Auctions announced last summer that they were going to be auctioning off a vintage Rolex Submariner once owned by Steve McQueen, there was an energy that echoed through the watch community. After all, Paul Newman’s Rolex Daytona had set a record north of $10M the previous year, and the vintage Rolex market was (and still is) already on fire.

What many didn’t catch at first was the questionable provenance of the watch, as it was purportedly gifted to McQueen’s stunt driver back in the day, and somewhere along the way survived a devastating house fire. Myself as well as several others began digging into the real story behind the watch, and after a few months of several media outlets casting doubt on the piece, a threat of legal action from the McQueen family estate finally pushed Phillips to pull the plug on the sale. 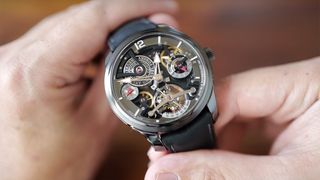 We’ve all had a night get out of hand, but luxury watch distributor Stephen Rostovsky’s escapades in December 2015 set the bar higher than any of us will likely ever reach. Though we’re unsure where the evening began, we do know that Rostovski’s early Monday morning hours were at the Sapphire Gentlemen’s Club in Manhattan. From there a pair of women proceeded to follow him back to his room at the swank Baccarat Hotel for a romp. Somewhere along the way, Rostovsky made an effort to lock away the rare and very pricey Greubel Forsey Double Tourbillon 30 Degrees Technique (valued at $600,000) into the hotel safe. However, it seems it was never locked.

Long story short, one woman was going to leave and the other said she would “escort her downstairs,” and the next thing Rostovsky knew they were both gone along with the watch and about $6,000 in cash. The watch was eventually recovered, but not before the whole story broke and The New York Post showed up at Rostovsky’s home to interview his wife on the subject. The strangest part? The man was the North American distributor for Greubel Forsey watches, and as far as we know he still maintains this role today.

This was yet another case where someone in a position of power was spotted wearing much more expensive hardware than he should be able to afford. Indonesian military chief, General Moeldoko, was repeatedly sighted wearing what appear to be very pricey watches from Richard Mille, Audemars Piguet, IWC, and others, though at one point when confronted he removed the Richard Mille, threw it to the floor, and claimed it was merely a high-quality replica. While this is certainly plausible it has never been verified (for obvious reasons).

You can see in a bit of a breakdown of the watches here that many are fairly popular models that certainly have been faked over the years, however one particular model — the Audemars Piguet Millenary — is such an obscure piece that it’s unlikely that it would have been produced by any of the replica companies in the first place. Furthermore, the fact that he knew for some time that his watches were being scrutinized, it wouldn’t be a stretch that he would pick up a fake watch and stage this entire stunt, especially considering that $400-$500 fakes these days are good enough to fool watch enthusiasts at a distance.

Words by Justin Mastine-Frost
Most Popular

24 Fashion Documentaries Every Highsnobiety Reader Should Watch While Quarantined
StylesponsoredJune 12, 2019

Pharrell’s Million-Dollar Richard Mille Watch Is Out of This World
MusicsponsoredNovember 15, 2019