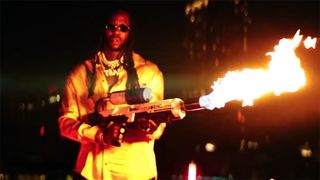 Last month 2 Chainz released the video for one of his two Hot Wings Are A Girl’s Best Friend cuts in “Girl’s Best Friend.” Now, the Atlanta rapper is back with a new clip for the EP’s other song, “Hot Wings.”

According to 2 Chainz, he almost didn’t drop the visual, but due to popular demand, he decided to unleash it anyway. The aesthetic finds 2 Chainz and his fans taking over a local chicken joint, before he makes his way to a rooftop to play with a flamethrower.

It also appears that Chainz is working on a new project titled Rap Or Go To The League. Be sure to check back with us for more details.

Almost didn’t drop this video but by popular demand .. OUT NOW…. Currently lockd in to finish up Rap Or Go To The League ?? masterpiece

In other music news, Childish Gambino, Tame Impala and Ariana Grande are set to headline Coachella 2019.