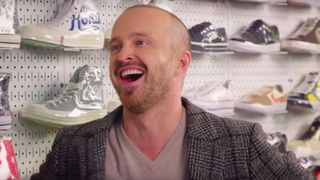 What kind of sneaker guy is Jesse Pinkman? I’d put my money on the Osiris NYC 83, the black Air Force 1 of skate shoes. But I won’t put that evil on Aaron Paul, as he walked out of Sneaker Shopping wearing the OFF-WHITE™ Nike Blazers.

He’s also a Vans Slip-On and Chuck Taylor guy, which he professes his love for in the interview. Of course, he also dishes plenty of stories from Breaking Bad, and also reveals he kept the outfit he wore at the end of El Camino, including that fire knit turtleneck.

As for what he copped, in addition to the Blazers, he picked up Air Jordan 1 “Not for Resale,” as well as toddler sizes of the Air Jordan IV and OFF-WHITE™ Nike Air Max 90 for his kid. A modest $3,800 cop.

Watch the full episode above.