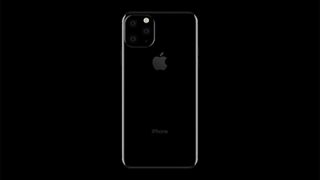 It might seem early in the year, but die-hard Apple enthusiasts are already looking forward to 2019’s new iPhones. Digit has what is reported to be a first look at the next iPhone model, which for now is being referred to as the iPhone XI.

From the rendering, the phone has a triple camera setup on the back accompanied by an LED flash. The three cameras are housed in a square unit, with two cameras aligned vertically and the third positioned to the side. Located above the lone camera is the LED flash, with the phone’s microphone found below.

Digit points out that Apple is expected to release three iPhones this year, although the models are currently still in the testing stage. The company rumored to be launching one low-end phone, billed as a possible successor to the iPhone XR, and two high-end versions succeeding the iPhone XS and the iPhone XS Max. It isn’t clear which variant the three-camera iPhone represents.

In addition to the new camera setup, the rendering shows the iPhone XI with a black back panel made of glass and the Apple logo at the center of the design.

For more information, head to Digit.