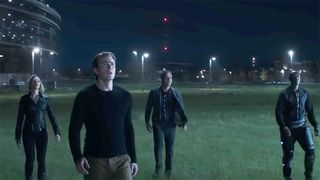 Rumors are brewing among Marvel fans who believe the studio is going to extreme lengths to keep Avengers: Endgame spoilers at bay. The Independent reports that fans believe certain characters have been edited out of the latest promo for the fourth Avengers outing, which dropped during the Super Bowl this weekend.

The speculation has been fueled by two scenes in particular. The first takes place as Captain America (Chris Evans), Black Widow (Scarlett Johansson), Bruce Banner (Mark Ruffalo), and War Machine (Don Cheadle) walk across a field. Hawk-eyed fans have spied that, as the heroes gaze up in formation, there’s a rather large gap between Banner and War Machine.

they EDITED SOMEONE OUT BETWEEN BRUCE AND RHODEY pic.twitter.com/DOG7d1W0yY

The second happens shortly afterward, as the gang strides through the Avengers HQ. Again, there is another gap in their formation. Take a look for yourself in the trailer up above.

So who could Marvel have erased from the TV spot? Could it be Iron Man (Robert Downey Jr.)? Nebula (Karen Gillan)? All answers will be revealed when Avengers: Endgame launches into theaters nationwide on April 26.

Watch the Deleted ‘Avengers: Endgame’ Scene That Has Marvel Fans in Tears
MoviessponsoredJuly 29, 2019

The Dropcast
Here’s What The New ‘Avengers: Endgame’ Footage Will Include
MoviessponsoredJune 20, 2019