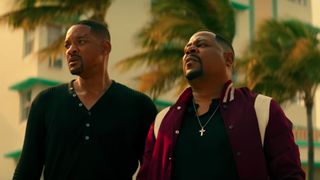 Will Smith and Martin Lawrence are back to their same old hilarious reckless antics in new trailer for Bad Boys For Life.

Still in Miami, Marcus Burnett (Lawrence) is ready to hang the badge up until a mysterious group of bad guys put a hit out on him. Teaming back up with the gun-toting Mike Lowry and his new squad of young cocky officers, our favorite cops duo tear up the streets of the 305.

DJ Khaled, who’ve we previously reported was cast in the film, finally makes a brief appearance in the trailer, but in a very brutal way. We still have no idea how big his role will be, but in a brief shot, we see Will Smith torturing the famed-producer in what must be an interrogation scene. Even in film, Khaled has the major keys. Hopefully, he won’t be the only Miami celebrity that makes an appearance.

Insanely pumped about Bad Boys 3, but why @djkhaled getting his arm chopped off?!? pic.twitter.com/azPMpQqpJg

‘Bad Boys for Life’ Scored a Record $68M in Its Opening Weekend
MoviessponsoredJanuary 20, 2020