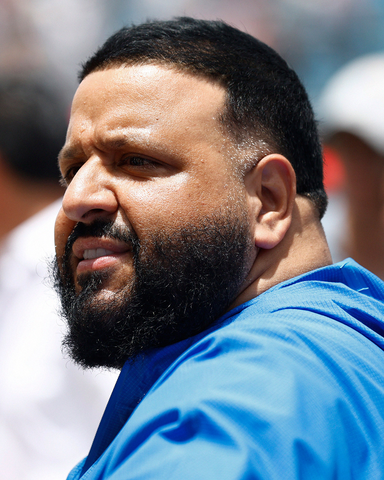 He’s a two-time Grammy Award nominee with 11 studio albums and 20-something Billboard ‘Hot 100’ singles below his belt.

In addition to his music career, omnipresent Khaled is a New York Times Best Selling Author, an Air Jordan III sneaker collaborator, streetwear don and the face of Weight Watchers – who also dabbles in luxury furniture design. In 2019 he added acting to his repertoire, lending his voice to the animated Spies in Disguise, and is due to appear alongside Will Smith in Bad Boys for Life in 2020.

Born in New Orleans, Louisiana, Khaled started out as a radio host in the 90s on Miami hip hop station 99 Jamz. He went on to DJ for hip-hop group Terror Squad before releasing his debut studio album ‘Listennn… the Album’ in 2006, featuring Lil Wayne, Rick Ross and Kanye West amongst others, which earned gold certification. Then in short succession followed albums We the Best (2007), We Global (2008) and Victory (2010), which broke into the top 10 of the US Billboard 200. In 2008 Khaled also founded his own label We the Best Music Group.

He garnered similar commercial success with his fifth studio album ‘We the Best Forever’ in 2011, featuring the song “I’m on One” feat. Drake, Rick Ross & Lil’ Wayne, which became his first top ten hit and got him a Grammy nomination.

Then in 2015 and early 2016 Khaled went supernova, much thanks to his Snapchat channel where his larger-than-life snaps (including getting lost on a Jetski and live streaming the birth of his son), garnered him global attention as a “living meme”– and millions of followers across all social media.

This paved the way for the release of his ninth studio album Major Key in 2016 – once again stacked with guest appearances from Future, Big Sean, Jay-Z, Drake, Nas, Kendrick Lamar, Nicki Minaj, Busta Rhymes and more – which scored number one on the Billboard 200 landing him a Grammy nomination for Best Rap Album. In 2017 he released his tenth studio album ‘Grateful’ – cue Alicia Keys, Beyoncé, Jay-Z, Justin Bieber, Drake, Rihanna, Calvin Harris and more – and Khaled’s infant son Asahd as executive producer, which debuted at number one on the Billboard 200.

Khaled put out his eleventh album, Father of Asahd in 2019, which broke in at number two on the Billboard 200.

We the Best Forever (2011)
Label: We the Best, Young Money, Cash Money, Universal

Suffering from Success (2013)
Label: We the Best, Cash Money, Republic

They Do Want Us to Have the DJ Khaled Air Jordan 5s
SneakerssponsoredOctober 11, 2022