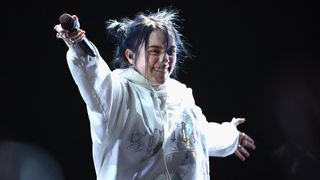 Following the release of her debut album, there’s little denying that 17-year-old Billie Eilish is a burgeoning superstar. Some may not know that instead of an extensive team of writers, producers, and engineers, Billie predominantly works with her older brother, Finneas O’Connell, directly out of their parents’ home.

The New York Times recently caught up with Billie and Finneas to discuss one of the standout songs from Eilish’s recently-released WHEN WE ALL FALL ASLEEP, WHERE DO WE GO?. “bury a friend” is a somewhat haunting affair, complete with references to the boogie man and a string of spooky sound effects.

Billie and Finneas revealed to The New York Times that they recorded the track on Finneas’ 21st birthday. They started with the shuffle beat, before Billie then began with a series of questions, ultimately referencing the monster under the bed. From there, the two incorporated a series of intriguing background noises, including a recording from one of Billie’s visits to the orthodontist.

“bury a friend” is undoubtedly one of those songs that is difficult to nail down to a particular genre, especially with its odd structure. Finneas told The New York Times that after they put out the track, he insisted that they could now make whatever type of music they want.

Press play above to hear Billie and Finneas dish on the making of “bury a friend,” then revisit Billie’s entire debut album below.