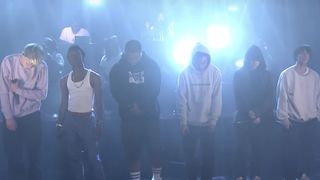 Yesterday, BROCKHAMPTON took a break from their three-night run at New York City’s Terminal 5 to appear on The Tonight Show Starring Jimmy Fallon. The hip-hop collective performed the track “DISTRICT” from their recent Billboard no.1 album, iridescence, which dropped last month. Watch them in action in the video up top.

This marks BROCKHAMPTON’s second meeting with Fallon this year, after they appeared for a rendition of “TONYA” back in June. Since then, not only has their album scored the top spot on the Billboard charts, but the collective have dropped a merch line, and released a feature-length documentary — The Longest Summer in America. Peep the trailer below.

Do you have a favorite BROCKHAMPTON track? Share yours in the comments.

In other music news, XXXTentacion confessed to domestic violence in a newly surfaced recording.