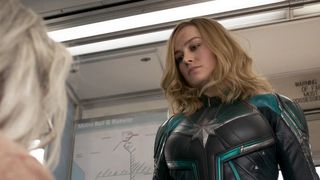 The first trailer for Captain Marvel has finally arrived. Starring Brie Larson as the elite Starforce pilot Carol Danvers, the film hints at the origin story of Captain Marvel and follows her as she fights an intergalactic war. Set in the ’90s, the film also features Samuel L. Jackson as a young Nick Fury

Danvers was first teased during the post-credits scene for Avengers: Infinity War. Captain Marvel will serve as a lead-up to Avengers 4 which is expected to feature the character.

Captain Marvel is the first female-led movie from the MCU. It hits theaters on International Women’s Day, March 8, 2019. Watch the trailer above and let us know what you think in the comments below.

In other news, ‘Game of Thrones’ dominates the 2018 Emmy Awards.