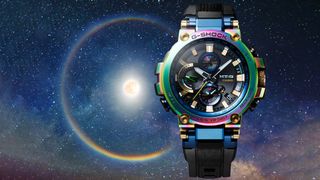 To celebrate the 20th Anniversary of the Metal Twisted G-SHOCK, Casio has unveiled a limited edition Lunar Rainbow MT-G. Take a look at the celebratory watch in the video above.

The MTG-B1000RB is based on the MTG-B1000, which was the first Bluetooth-connected MT-G watch. This version features a particularly eye-catching rainbow ion plating which refracts light in multiple colors, creating a lunar rainbow effect.

The special edition MTG includes a soft urethane band, as well as special packaging which continues the rainbow IP finish. The watch also packs an array of features including a Tough Solar power, a carbon fiber-reinforced case, sapphire crystal, and Triple G Resist.

Visitors to the Baselworld Expo 2019 were impressed by the rainbow bezel, where it is on display from March 21-26 at the Casio booth.

Gorillaz Team Up With G-SHOCK For the Second Time on Another Colorful Collab
DesignsponsoredSeptember 16, 2019