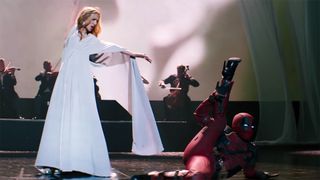 Deadpool 2 is due in theaters in just two weeks, and on premiere day, Columbia Records is scheduled to release the movie’s official soundtrack. Here, we in turn get a taste of the project with “Ashes.”

“Ashes” is an original song by the legendary Celine Dion, as she welcomes Ryan Reynolds as Deadpool to star in the accompanying aesthetic. While Celine performs the number on stage, a high heels-wearing Deadpool then unleashes a majestic dance routine to complement.

In addition to Celine Dion, the Deadpool 2 soundtrack features the likes of Diplo, French Montana, Lil Pump, Skrillex, Run The Jewels, Cher, and Dolly Parton, among others. You can pre-order the album now, as it drops the same day as the film, May 18.