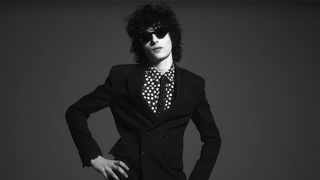 Finn Wolfhard – best known for his role in Stranger Things – is the newest face of Saint Laurent. The move sees the 16-year-old actor join Keanu Reeves, the other star of the brand’s Fall/Winter 2019 campaign. The house revealed images for the Reeves campaign via its Instagram account and they followed suit with their announcement that they’d recruited the young Canadian actor, too.

In the video, Wolfhard wears a black double-breasted suit with a dotted shirt, skinny tie, and retro shades.

Anthony Vaccarello tapped British photographer David Sims to shoot Wolfhard in the Dylan-esque campaign. The pivot from Slimane’s musician-fronted campaigns to a more Hollywood focus bodes well for Vaccarello’s second standalone menswear show for the house which will take place in LA on June 6.

Stay tuned for where to find the collection when it is released in the coming months.

Meanwhile, Stranger Things season three is due out on Netflix July 4. Will you be tuning in?

On this episode of The Dropcast, we are joined by Guillaume Philibert, founder of Filling Pieces. He founded his brand ten years ago when he was just 19, and since then has expanded his business from sneakers to a full apparel line. Check below.

8 Things You Need to Know About Counterfeit Luxury in 2019
StylesponsoredJune 6, 2019
Follow
Highsnobiety Style
What To Read Next
Load More
Search Results
Load More