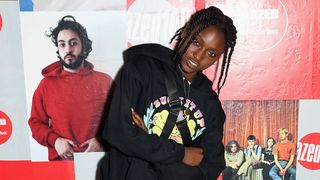 Flohio is back with her first new song of 2019. “Hell Bent” has the London MC expertly cutting through a beat courtesy of JD. Reid, who was responsible for slowthai’s “Inglorious” featuring Skepta. Flohio also dropped an appropriately fire music video, directed by regular collaborator Duncan Loudon. In front of a vivid red background, she shapeshifts, mirroring the track’s unparalleled energy. Check out Flohio’s “Hell Bent” video above.

After her explosive performance at Highsnobiety Soundystem Milan back in April, Flohio will appear on our Highsnobiety Soundsystem stage at Melt Festival in Ferropolis, Germany July 19-21. More details on that here.

For more Flohio, revisit her Wild Yout EP below.

These 16 Bougie Products Will Help You De-Stress & Relax at Home
SelectssponsoredApril 12, 2019

The 10 Wildest Chains in the Rap Game
MusicsponsoredMay 6, 2019

Logomania Has Even Infected These 7 Incredible Minimalist Brands – What the Hell Happened?
SelectssponsoredSeptember 20, 2019