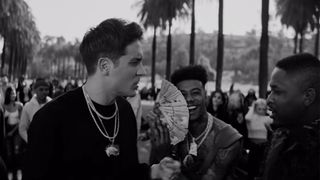 G-Eazy and Blueface just dropped a video for their song “West Coast” and it’s full of west coast OG cameos.

“West Coast” featuring ALLBLACK and YG was released back in February, but the video was worth the wait. G-Eazy explained on Instagram that the video was made to “capture the essence of the whole coast, a portrait of California culture.”

Dropping my favorite video I ever made tonight ahhhhhhhhhhh can’t wait for the world to see it 🙏🏼🖤 WEST COAST !!! Made this shit with friends to capture the essence of the whole coast, a portrait of California culture, hella hyped 🙏🏼

Desiigner Wants to Be Released From G.O.O.D. Music
MusicsponsoredOctober 3, 2019

15 Drops
The 15 Best Products to Drop This Week & Where to Buy Them
SelectssponsoredNovember 24, 2019