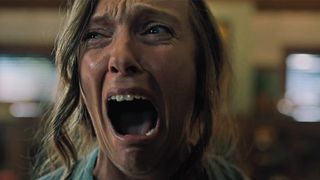 The views and opinions expressed in this piece are those solely of the author, and do not necessarily reflect the position of Highsnobiety as a whole.

I can’t remember the last time I left a movie theatre thinking I was about to blow chunks, but I wandered out of a screening of Hereditary – the new American horror some critics are calling a “masterpiece” – light headed and sweaty as hell. To me, that’s the sign of a solid scary movie: it should burrow itself beneath your skin like a disease and follow you home, forcing you to check behind every corner and double-take the dark spots in a dimly lit room.

But some people, understandably, like to walk in to a movie theatre and feel frightened from the get go, leaving it behind once the credits roll; movies where loud bangs wake up a mother who’s been left home alone for the night, or killer clowns appear out of nowhere and chase kids down never-ending corridors are great for that. It’s that familiar, giddy rush – like riding a rollercoaster – that can make watching horror movies on the big screen so enjoyable. Like you can switch off and enjoy without overthinking things.

I’ll own up now: I didn’t cover my eyes or jump out of my skin once throughout Hereditary. Instead, it did something more sinister. It put me in some kind of trance I couldn’t shake; like I was possessed, and whoever was responsible for it wasn’t willing to let go.

Is this unassuming arthouse horror destined to become a box office smash? Definitely. Will it bowl everybody over with its calculated and clever method of freaking you the fuck out? Well, maybe not.

While the film is hardly the kind of cerebral movie mainstream audiences are going to ignore completely, it’s not exactly the lazy popcorn scarer we’re used to seeing either. Still not sure if you’ll find it terrifying or not? Well, here are five reasons why Hereditary left us truly messed up.

1. It’s About a Family Carrying a Strange, Unexplained Curse

For those who haven’t quite been caught up in the Hereditary hysteria yet, here’s a spoiler free version of what goes down in the film, which has enjoyed a crazy amount of hype since it premiered to rave reviews at Sundance this year. It  opens with a funeral; the brilliant Toni Collette’s character Annie Graham is in mourning after the death of her mother and since that day, there’s been an ominous atmosphere taking over Annie’s house. Soon, it’s affecting her, and her daughter Charlie’s behavior is getting stranger by the day too: the young girl is seeing things, and snipping the heads off dead birds to keep in her pocket.

Just when you think you know where all of this crazy behavior is coming from, there’s a twist. Then another. And then another. Perhaps that’s what makes Hereditary so sinister; even up until its final moments, you can’t say for sure how it’s going to end, and the source of all the insanity seems impossible to place. Needless to say, the way it does end is either going to shake you up or leave you dumbfounded; mouth agape in the movie theater.

3. It Takes Its Time Getting to the Terror, Leaving You Uneasy

You’ll find Hereditary terrifying if you’re prepared to be patient. The fatal error most horror movies make is assuming we’re going to be spooked by anything from the moment we sit in our seats – wrong. Sure, directors can throw in a cheap scare to show the viewer who’s in control, but if we don’t know anything about the characters you’re imparting all of this senseless and deranged terror on, we’re not really going to feel it with them. It takes its time getting to the juicy scares, building itself as an unsettling family drama before plunging into the jet black scenes that have earned it that cult status. The wait makes the payoff twice as disturbing.

4. The ‘Based on a True Story’ Trope Is BS, So Hereditary Rejects It

It also benefits from the fact that most films like this try to coax you in by claiming they’re based on a true story. Hereditary, on the other hand, is proudly fictional, but it’s so furiously dedicated to its heinous and unsettling story that you convince yourself otherwise. In an age where most movie producers bait audiences into thinking their BS actually went down somewhere, this movie’s originality means you can spend less time trying to pick apart what did and didn’t happen, and more time getting consumed by the paranoia at the heart of it.

5. It Will Manipulate Your Emotions in a Super Smart Way

The flick’s director, Ari Aster, who can be proud of this being his debut feature, has somehow mastered the way movies can manipulate our emotions, and trick us into thinking that what’s unfolding on screen is real anyway. People often think movies exist to help us escape from things, but what if it’s actually bringing us closer to a nightmarish real world? That power is terrifying in itself, and the way Aster manages to pull it off is quite haunting too. By putting us through the stressful experience of the Graham family’s grief – not once, but twice – we start to recall all the times we went through similar circumstances: losing someone suddenly or witnessing death for the first time. It makes you a little delusional; you probably started questioning reality too.

Like most movies, the way horrors affect people is completely subjective: some might be shook to the core by cheap jump scares, while others might be thoroughly freaked out by one super-weird scenario that lingers in their mind long after. The trick to figuring out if Hereditary is going to be your thing or not is to try and determine what really haunts you as you try and sleep at night.

If you want to walk out the movie theater feeling relieved that it’s all over – like you’ve just been let off some terrifying roller coaster ride – then this indie horror might not be your thing. But if you’re into the idea of seeing some demonic imagery in shadowy darkness, or never looking at your family members in the same way again, then the monumentally messed up Hereditary might be the most memorable movie theater experience you’ll have this year.

If you’re at home and dying to watch a movie, here are the 12 best documentaries to watch on Netflix right now.

Words by Douglas Greenwood
Most Popular