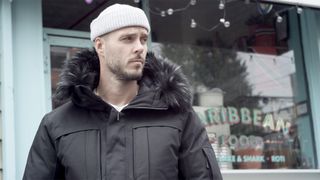 From his “New Yawk” accent to his jocular demeanor, restaurateur John Seymour is a thoroughbred product of the Big Apple. There’s nowhere his love of the city he calls home is more apparent than at Sweet Chick, his soul food-flavored restaurant whose fried chicken biscuit has become a perennial favorite of everyone from the fashion set to fellow New York-born tastemakers like A$AP Bari, who hosted a VLONE pop-up in the restaurant’s coffee shop extension.

Seymour’s love affair with New York, and his passionate desire to protect its history and heritage, are without a doubt one of many reasons Sweet Chick has become a staple of Ludlow street and the city as a whole. Seymour – rocking a Cryos jacket from The North Face – took us on a tour of the New York eateries that defined his early experience and helped shape him.

“If you look on the walls we have old pictures of Pink Pony and Max Fish. Man, I remember this block from twenty years ago. I reused all of the old doors and the old wood from Max Fish as a respect thing. You know, I feel like even in an establishment you have to have respect for the culture and history that was here. History might not be important to everyone, but it’s important to me,” said Seymour.

Sweet Chick’s Ludlow Street location has become a hotspot for low-key celebrity sightings – if you eat there enough you’ll definitely see one of its more famous investors, Nas, enjoying a plate in the back sans fanfare. Yet it wouldn’t have attracted its diverse demographic were it not for Seymour’s determination to encapsulate the singular feeling of New York into the very walls. “I feel like I was literally able to grab pieces of New York history,” Seymour shared of the vintage photo sets and worn wood that dominate the space.

Next door, at the coffee shop, which also houses Seymour’s office, a wonderful sense of community permeates. “I wanted to be able to have people we know come through. You know, we have people who are working on different projects come here and connect so there’s very much a sense of camaraderie.”

Seymour is far from the only culinarily-inclined member of the family. His wife Fallon owns Pearl’s, a sought-after Caribbean restaurant in trendy Williamsburg. Born and raised in Trinidad, Fallon – who named the restaurant after her late grandmother – serves up authentic West Indian food, including Trini favorite, “bake and shark.”

“The first time I went to Trinidad I wanted to go to the beaches. If you hang out there you’ll see lines of people waiting to get bake and shark. I’d never heard of it before but the first time I had it I was like, ‘this is crack,’” said Seymour. The dish is comprised of a pocket of airy, fried dough that is stuffed with fried shark (spiny dogfish to be technical), slaw and mango. After that, it’s topped with an array of sauces of the eater’s choice, including tangy tamarind, which is a crowd favorite.

The dish is unique to Trinidad and has since become the crowning glory of the restaurant, right alongside its signature homemade pepper sauce, which the Seymours are quick to emphasize is much more concentrated than American hot sauces. “I learned the hard way,” joked John. Still, experiencing new cultures – even if there is a bit too much heat, is what Seymour loves most about New York. “I think presenting a specific culture authentically and then being able to connect it back to the city is such a beautiful thing.”

A consummate Caribbean food lover, Seymour’s tastes aren’t limited to Trinidadian cuisine. Peppa’s, an unassuming counter-service Jamaican restaurant in Prospect Lefferts Garden, represents the multicultural elements of New York the restaurateur loves. Located along a strip of buildings that house 99 cent stores, knick-knack shops and a few hair salons, Peppa’s is at the beating heart of Flatbush Avenue. As many New Yorkers know, the area is heavily dominated by the flavor and culture of the West Indies, largely because of its concentrated immigrant and first generation community.

“This place has been around for a minute. For me, places like this really represent what’s beautiful about Brooklyn. There’s so much culture here, and the food is so bomb.” Indeed, while Peppa’s might not offer white tablecloth service or a fussy “curated” ambiance made all the more expensive by overpriced cocktails, it has authenticity on its side. Whether it’s the jerk chicken, oxtail or curry goat, the soul of a small Caribbean island whose culture has become a global export is present in every bite.

“Somebody put me on to this spot – it was one of the Italians I work with. This has been one of my favorite slices since then. If I’m early to pick somebody up from the airport, I always come by here and get a slice. I love that they use a brick oven and you can really taste it.” Aside from offering a quintessential New York pie, Di Fara is rife with a sense of nostalgia, ironically enough, that nostalgia comes from fruit punch, Seymour’s drink of choice in elementary school. “If the weather is nice, the sun is out, and I’m walking down the block with a slice of pizza it’s a good day. I really don’t need much else on the planet, except maybe a fruit punch. This was lunch in grammar school. If you were lucky enough not to have to eat the school lunch you could go out and get yourself a slice and a fruit punch,” he explained.

Di Fara’s also reminds Seymour of a simpler time of his life – his early 20s when he worked as an electrician. “This slice brings me back to work ethic. I’m a blue collar guy at the end of the day so eating here always brings me back to that era in my life where my hands were always dirty but I was still happy. I was working with a brotherhood of guys who were great. I used to come out to Rockaway Boulevard every day and my boss would pick me up. We did a lot of work around here.”

The Beauty of the Basics at Regina’s Grocery Store

Just as Flatbush Avenue offers up culinary gems straight from the black diaspora, Regina’s Grocery Store in the Lower East Side is a reminder of New York’s vibrant Italian population. Half deli, half restaurant, the bustling storefront offers meaty sandwiches named after the owner Roman Grandinetti’s very own family members. From the Uncle Chubby (stuffed with hot soppressata, fresh mozzarella and greens), to the more reserved Lil Phil (mortadella, provolone and mustard), Regina’s menu puts the theme of family first.

It’s a mentality that Seymour, father and family man himself, can get behind. In a lot of ways, Sweet Chick was built on the same foundation. Getting into the restaurant business was largely inspired by his wife, whom Seymour says put the battery in his back to get out there and actually do it. “After I was an electrician I started bartending and that’s when I kind of realized that hospitality came naturally to me. After I met my wife she kind of encouraged me to go for it and we opened up Pops,” he explained. “Now with Sweet Chick I’ve been able to create a brand around the restaurant and it’s really all just inspired by community, family and living in the city I grew up in. It’s always been about New York.”

“Chinese food is so fucking New York.” Seymour’s declaration rings true at Nom Wah Tea Parlor, an over 80-year-old restaurant staple that has been continuously run and owned by the same family since its opening. “Man, coming to a place like this is so nostalgic. The history behind New York – and again, going back to taking over an existing restaurant like I’ve done, or creating a brand new thing in Brooklyn like my wife, history is so important. We’re sitting in a place where there has been generations of work done. Even the block outside is a famous block, so many things have gone down on that street. You can’t duplicate this energy anywhere else. It’s special and being a part of it gives you a sense of satisfaction.”

Wilson, who took over the restaurant from his parents, has also become a dear friend of the family. “We’re in the restaurant business and we’re around the same age so like we kind of bonded over that a little. It’s kind of unique to find another person – especially someone like him, who has kids. It’s always dope to connect with people like that who are in the same place in life,” explained Seymour. As the two chopped it up over rice dumplings, sweet pork buns, egg rolls and crab claws, it’s apparent that New York’s restaurant scene, though sprawling, is intimately connected. “I look at this guy and I have nothing but admiration. People in the restaurant scene here, they can’t fuck up. For a place like this to have been open for almost one hundred years…It’s crazy.”