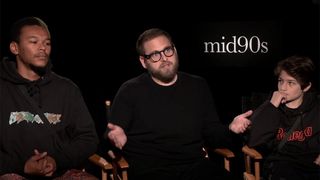 We had the opportunity to get an advanced screening of Jonah Hill’s upcoming directorial debut, Mid90s, which is a skateboarding story he hopes reflects universal truths for audiences of all ages.

Nearly flawless in its execution, the film leans heavily on newcomers, Sunny Suljic and Na-Kel Smith, who pull off an exquisite on-screen friendship during a time in a young person’s life when one’s peers — not social media — were a sounding board for life’s ills.

Using skateboarding and hip-hop as its main ingredients for success, Hill, Suljic, and Smith, were eager to discuss the thought process behind the film, and how they tried to eliminate any clichés that are usually associated with each subculture.

Mid90s is out this Friday.

For more Jonah Hill content, check out his appearance on ‘Falling Upwards’.

Jonah Hill Reportedly Drops Out of Villain Role in ‘The Batman’
MoviessponsoredOctober 17, 2019

Jonah Hill Rumored to Star as the Villain in Upcoming ‘The Batman’ Reboot
MoviessponsoredSeptember 24, 2019
What To Read Next
Load More
Search Results
Load More