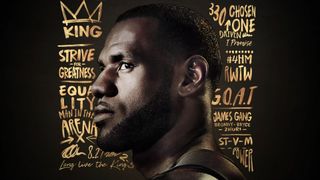 LeBron James, who is currently competing in his eighth straight NBA Finals, has been chosen to cover NBA 2K19 20th Anniversary Edition. Alongside a photo of James, which conveniently shows no jersey due to his impending free agency, is an artistic compilation of words chosen by LeBron himself, each holding a special meaning to the three-time NBA Champion.

“It’s humbling to be on the 20th anniversary cover of a game I’ve played and loved since I was a little kid,” says James. “We were able to do something really unique for the cover that represents everything that drives me and inspires me – from my family to where I come from and words I live by. I’m honored my journey can be part of this special time in 2K history and I’m excited for fans to see it.”

For more, watch a young LeBron get tatted in Nike’s new ad.

Work From Home
What Have NBA Players Been Up To Without Games to Play?
LifestylesponsoredMarch 20, 2020