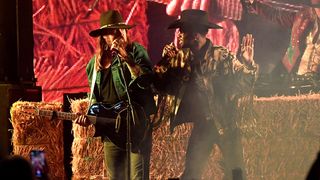 As expected, there are horses in the back, and naturally, the horse tack is attached. At one point, Lil Nas X gallops on horseback at full speed while clutching a cartoonish money bag with a big dollar sign on it, and a grizzly character taking aim at someone with a rifle. Given the hilarious gift that is Nas X’s Twitter account, this masterpiece is bound to be full of meme-worthy moments.

Watch all the action roll out above.

“Old Town Road” Officially Ties for the Longest Time at No. 1 in History
MusicsponsoredJuly 23, 2019