As the transition to electric mobility gains momentum, car manufacturers everywhere race to design the most advanced, powerful, and sleek fossil fuel-free rides. Often though, the greater questions of what (and who) is at stake if we do not modify our gas-guzzling habits are forgotten. 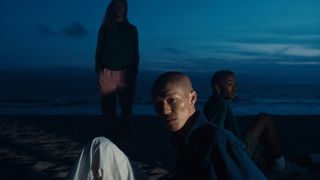 The film was created by the award-winning Swedish director Sheila Johansson and director of photography Kate Arizmendi, whose previous clients include Vogue and H&M. In an industry where, in Johansson’s words, “it’s very unusual that both director and DOP are women,” the two pooled their creative visions to capture the car and address the need for change in a different way.

“I wanted to combine Mercedes’ EQ concept with Highsnobiety — futuristic and fashionable,” explains Johansson, “to show a different route to what’s usually expected.” Rejecting the factual and flashy conventions typical of luxury automotive advertisements, Johansson opts for a nonlinear narrative and unusual camera angles. “My main inspiration was the car itself, it’s very minimalistic and I wanted the cinematography to embrace that too,” she says.

But, despite its dreamlike aesthetic, the clip has a more substantial message to impart. Opening with the statement, “Our future, our generation will set the future,” Johansson wants to “make people think about how they want to move in the world and in the future.” Wrice, who speaks the line, shares this belief and is set on using her influential voice to help change the future for the better. “It is our duty to show our appreciation for the generation that set the future for us,” she explains, “and we too must do it for the next generation.”

The concerns raised in the film are not only applicable to the environment, but also to the social and political climate that today’s youth are growing up in. Speaking about the film’s closing line, “With open hearts, we will connect for the better and contribute for the future,” Wrice says, “unity is so important. If someones political views don’t align with my values, rather than shunning them, I keep an open mind and begin with dialog. I believe that we can start to move forward from there.”

Shot at dawn and dusk, the film captures the car’s sleek silhouette as it navigates the Californian landscape; moving from a concrete underpass, along craggy sea cliffs, and through the foothills of the Sierra Pelona Mountains. As darkness falls, its virtual radiator grille, one of the car’s identifying design elements, illuminates.

The car’s premium appearance has the engineering to match, and it features one motor at the front axle and one at the rear giving an impressive system output of over 200 kW. Depending on the battery installed, the electric machine is capable of achieving a range of approximately 400 kilometers.

Although only a concept car, the Concept EQ is a testament to the brand’s dedication—and engineering capability—when it comes to electric mobility. According to the Head of Mercedes-Benz Cars Dr. Dieter Zetsche, the aim is to have 10 fully electric vehicles on the market by 2022 as part of the progressive “EQ by Mercedes-Benz” initiative. Standing for “Electric Intelligence”, this is Mercedes-Benz’s comprehensive offer of everything all-electric and, as electric mobility becomes commonplace, it is also the carmaker’s stake in the future.

Watch our video, above, or head to Mercedes’ website for more information about the Concept EQ.

Sponsored Story
The Mercedes-Benz EQC Edition 1886 Is Driving Into a New Dawn
DesignsponsoredMay 29, 2019