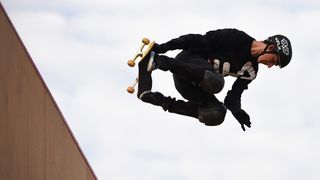 American professional skateboarder Mitchie Brusco made history over the weekend as he landed skateboarding’s first-ever 1260 at the X Games. For a better understanding of the feat, a 1260 is three-and-a-half full revolutions.

While the crowd and commentators went absolutely wild over the trick — and rightfully so — Brusco remained fairly calm following the monumental maneuver. After the event, the 22-year-old skateboarder spoke with reporters regarding his approach to the 1260 saying, “I don’t know, it just kinda worked.”

Unbelievable. Mitchie Brusco (@Mitchiebrusco84) wrote his name in the skateboarding record books forever today when he became the first ever to successfully land a 1260. How does he feel? He’s…still processing. #XGames pic.twitter.com/1dojsOXe5P

This wasn’t Brusco’s first historic day on a skateboard, though. Back in 2011 he became the third skateboarder to nail a 900 in a Big Air contest, and in 2013 he became the second skater ever to land a 1080 on the MegaRamp.

I just had a proper meal and took a nap ?. I’m trying to keep up with all the craziness in my head that seems to follow Xgames. I gained 30k + followers overnight… so what up to all the new guys up in here. 100k ??‍♂️??‍♂️??‍♂️ —- So so so much work goes into preparing for these contests and then it’s over in an instant. It’s hard to keep up with the overflow of emotions, but I think that’s what makes it so special! I’m so proud of my friends.. who push me and also keep me in check. @jimmy_wilkins is the most humble and hard working person, we could all be a little more like jimmy. He deserves everything in this world and more. @claykreiner showed heart pushing through injuries and putting himself on the podium in vert, power moves G ? @ronygomes is so dedicated and passionate, and his trick selection is top notch.. no doubt rony will be a big air contender for many years. And congrats to @elliotsloan for the 7-9 gold medal! I’m gonna sit down and game on my pc until my eyes bleed. Cheers, – Tricky –