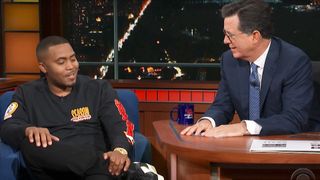 In a recent episode of The Late Show with Stephen Colbert, Nas arrived to share a few fun facts about what it was like working on his Nasir album with Kanye West in Wyoming. Watch above.

The rapper started by discussing his love for hip-hop and how the genre has morphed since the ’80s, before moving on to describe Wyoming as “One of the most beautiful places [he’s] ever been to.”

Wyoming was not only beautiful, but “the last place” he ever thought he would record the album. However, “Kanye is the kind of guy who needs to be away from everything when he’s recording, I guess,” Nas explained. “I was like ‘I’ve never been there.’ But I went there, and it was a great experience.”

When Colbert asked what it was like being up in “Grizzly Country,” Nas responded that while he hadn’t seen any bears, he did encounter a sick moose. “I saw a moose. I think he was a sick moose ’cause he was like, eating off a branch, and like, he didn’t look that strong.” In case you were unaware, he added that, “You can tell a sick moose when you see one.”

While with Colbert, Nas also performed a track from Nasir, “Adam and Eve,” which you can watch below.

Do you have a favorite Nas album? Let us know in the comments.

Now read why we think that while Nas’ album ‘Nasir’ says a lot, it avoids the most important issue of all.