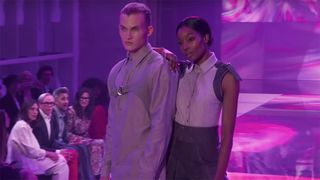 Netflix will soon be premiering a new high-stakes competition series, titled Next in Fashion. As the show is due out on the streaming platform later this month, today we get a look at what to expect from the program.

Hosted by fashion designer and TV personality Tan France and designer and model Alexa Chung, Next in Fashion pits some of the world’s brightest designers up against one another to become the next big name in fashion. These talented contestants aren’t starting from scratch, however, as they have worked for some of the most respected names in the industry and dressed A-list celebrities alike.

Next in Fashion features 18 contestants going head-to-head as they must tackle various trends and design styles that have influenced the way the world dresses. Guest judged by the likes of Tommy Hilfiger, Kerby Jean-Raymond, Phillip Lim, “Dao”- Yi Chow, Maxwell Osborne, Adriana Lima, and Christopher Kane, the group of designers will be competing for a chance to win the grand prize of $250,000 and an opportunity to debut their collection with luxury fashion retailer Net-a-Porter.

Next in Fashion debuts on Netflix January 29.

Where to Shop the Semi-Finalist Designers of Netflix’s Next in Fashion
SelectssponsoredFebruary 19, 2020

Here Are All the Movies & TV Shows Coming to Netflix Next Month
MoviessponsoredFebruary 28, 2020