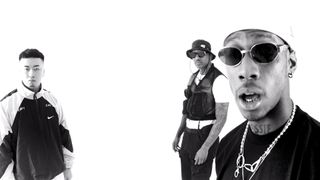 Octavian has dropped a remix of his hit song “Bet,” featuring a new verse from Skepta alongside the original verse by Michael Phantom.

Despite only releasing the original a few weeks ago, the UK rapper has uploaded a new video with Skepta joining the head-bopping crew, as well a bunch of extras.

Skepta’s slower flow fits in well with Octavian and Michael Phantom’s verses. He also name drops Virgil Abloh in his bars: “What you mean why am I wearing Louis? Can’t you see Virgil’s in the office?”

Aside from the new verse the video stays true to the black-and-white original. Watch it above.