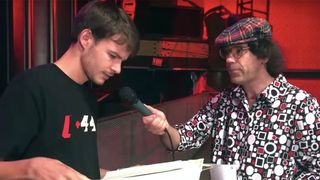 Everyone’s favorite Human Serviette, Nardwuar, linked up with Rex Orange County after his performance at Vancouver’s Vogue Theatre earlier this week. As is to be expected, Nardwuar dug deep, unearthing a photo of a young Alex O’Connor playing the drums, singing a cover of Green Day’s “American Idiot.”

The singer-songwriter gained prominence with singles like “Loving is Easy” and “Best Friend,” and was featured on Tyler, the Creator’s Flower Boy album on “Foreward” and “Boredom.” He’s currently wrapping up his North American tour, playing in Portland tonight, Santa Ana on August 12th and Los Angeles on the 13th.

Check out Rex Orange County’s interview with Nardwuar above, and revisit his video for “Sunflower” below.

In other music news, DRAM dropped a wacky video for “Best Hugs.” Check it out right here.

Young Thug Talks His Love of Danny Glover & ‘The Flintstones’ With Nardwuar
MusicsponsoredMay 13, 2019