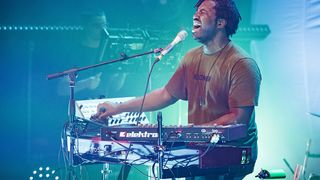 “Treasure” is the latest music from Sampha since his last album Process dropped back in February 2017, and the artist shared a post via Instagram teasing the new track.

I had the honour of writing a new song for a film called “Beautiful Boy” which is out in the US today. It’s called “Treasure” and I hope you enjoy listening (swipe up in stories) x @beautifulboymovie @tchalamet

Sampha said he wrote “Treasure” after watching Beautiful Boy for the first time. It “really resonated with me on an emotional level, and ‘Treasure’ is my response, filtered through the lens of my own experiences,” he said, in a statement.

“Treasure” is one of 17 songs on the Beautiful Boy official soundtrack, which also features John Lennon, Davide Bowie, Nirvana and more. Enjoy “Treasure” above, and have a listen to the entire soundtrack via Spotify below. Beautiful Boy opens in theaters today.

In other new music, Kodak Black taps Travis Scott and Offset for the tropical jam, “ZEZE.”