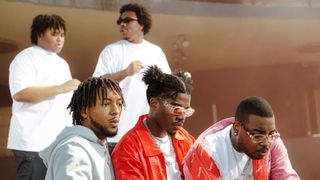 Smino has unveiled a visual for “Z4L,” the Bari and Jay2-assisted track featured on his 2018 album NOIR. Cousin Stizz and Buddy also make special cameos in the video which rolls out like behind-the-scenes footage of Smino’s real life. When he’s not on stage performing in front of a huge crowd at a sold-out show, the St. Louis rapper can be spotted doing a variety of activities with a tight-knit crew from practicing yoga to partying all night long.

A few months ago, Smino collaborated with AUGUST 08 on the track “Blood on My Hands.” Watch the narrative unfold in the video above and scroll down for the remaining dates on his Hoopti Tour.

Smino Is a High-Powered Jewelry Dealer in His Video for “Klink”
MusicsponsoredJune 6, 2019