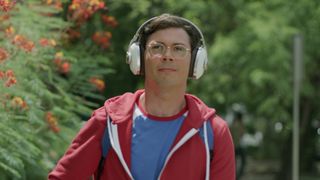 Netflix has unveiled a trailer for Special, an upcoming series based on Ryan O’Connell’s memoir I’m Special: And Other Lies We Tell Ourselves. O’Connell is the star of the show, as well as serving as the creator and executive producer, which follows his journey as a gay man living with cerebral palsy, but not entirely accepting of his disability.

In the trailer above for season one, the show spotlights Ryan O’Connell making his co-workers at a digital media outlet believe that his disability is the result of being hit by a car. However, he was born with the disability. “If you could get rid of the thing you hate most about yourself, the thing no one else understands, wouldn’t you do it?” he says in the trailer. “I was in the closet about being gay, and then I was in the closet about being disabled, and now no more closets.”

Other notable characters in the series include Jessica Hecht portraying as O’Connell’s mother, Karen Kayes, and Punam Patel as O’Connell’s co-worker and friend, Kim Laghari. The trailer also showcases Kim’s struggles which injects another major theme in the series as well.

Season one of Special consists of eight episodes, and will be available on Netflix beginning Friday, April 12.