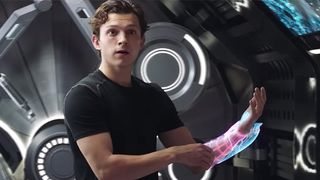 A Chinese trailer for Spider-Man: Far From Home has revealed new dialogue from the highly anticipated sequel to Spider-Man: Homecoming.

Chinese audiences will get to see the new Spider-Man on June 28, ahead of the July 2 opening in North America. That also means that like there are sure to be a number of spoilers floating around ahead of the American release. The Chinese trailer won’t spoil too much for MCU fans, in fact it’s a lot of the same footage as the last theatrical trailer, with a little added dialogue to keep you going until July.

Firstly, there’s new dialogue from Mysterio, played by Jake Gyllenhaal, who concedes, “It’s a hard path, the life of a hero. People depend on me. Even if you win a battle, sometimes they die.” He then ponders, “The world is asking, ‘who is gonna be the next Iron Man?’”

We also hear more from Nick Fury, played by Samuel L. Jackson, as he encourages Spidey to expand his purview following the death of his mentor, Tony Stark.

There are some never-before-seen action sequences in there, too. Take a look at the video above.