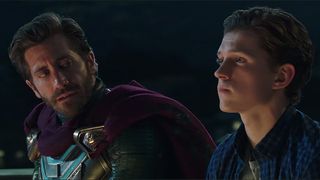 Sony and Marvel just released a new trailer for the upcoming Spider-Man: Far From Home movie. Tom Holland– who plays Peter Parker in the final chapter of this phase of the MCU– opens the trailer with a spoiler warning. And as it begins it’s pretty clear why we need it. The trailer opens with Parker and Happy Hogan, played by Jon Favreau, mourning the death of Tony Stark at the hands of Thanos. Watch the trailer above.

In the first teaser trailer, we learned that film would see Parker travel to Europe with friends during his summer break. The Elementals comprise the “bad guys” this time and Spidey needs to team up with Jake Gyllenhaal’s Mysterio, who was previously thought to be a villain until Gyllenhaal set the record straight earlier this year.

The biggest reveal of the latest trailer is that the there is now an MCU Multiverse, and Thanos’ finger snap caused a tear in the dimension that brings Gyllenhaal’s Mysterio to this dimension, from a “different” earth.

In other news, Victor Cruz stops by The Dropcast to talk sneakers and his new collaboration. Check below.