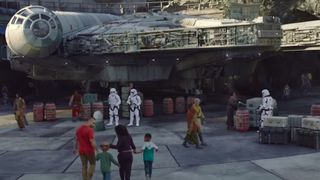 Disney provided a glimpse of its massive sci-fi world Star Wars: Galaxy’s Edge, with a drone fly over perspective last year, and beginning May 31, the highly-anticipated theme park will finally open for business at the Disneyland Resort in Southern California, followed by Disney’s Hollywood Studios in Florida on August 29.

#StarWars: #GalaxysEdge will open May 31 at the @Disneyland Resort and August 29 at @WaltDisneyWorld Resort! Details: https://t.co/G5zUih3hGk pic.twitter.com/UmkFpHrNnx

The theme parks were expected to open later this summer or fall, but according to Disney, “high guest interest,” led its decision to speed up the opening. However, there’s a catch. Both parks will open with only one of the two major planned rides ready to run right away, “Smugglers Run” and “Rise of the Resistance.”

“Smuggler’s Run,” is a unique ride that allows guests to pilot the Millennium Falcon, and will open in May as “phase one,” while “Rise of the Resistance,” where riders end up in the middle of a battle between the First Order and Resistance, will open “later this year” as “phase two.”

#EXCLUSIVE drone video of #StarWars Galaxy's Edge at #Disneyland. Opening to the public on May 31st. pic.twitter.com/EW71yKORl0

In the clip above courtesy of Rob McMillan of ABC 7 Los Angeles, a glimpse of the furnished park reveals weathered-looking settlement with rock formations to mimic the diverse sci-fi worlds evident in the films. Fans of the franchise will recognize signature elements throughout such as parked X-wings, the Millennium Falcon as well as familiar characters like Rey, Finn, Poe, BB-8 and Chewbacca. Additionally, the clip displays immersive interior and exterior spaces that are meticulously detailed, which die-hard fans will truly admire.

Disney also says that guests planning to visit Star Wars: Galaxy’s Edge at Disneyland in California between May 31 and June 23, will need valid theme park admission and will be required to make a no-cost reservation, to access the land. Information on how to make a reservation will be available at a later date on Disneyland’s website and the Disney Parks blog.

Much more details about the Star Wars: Galaxy’s Edge theme park can be found on the Disney Parks website now.

There Could be a X-Wing-Themed adidas Ultraboost Coming Later This Year
SneakerssponsoredSeptember 13, 2019

Lucasfilm Announces the Next Chapter in the ’Star Wars’ Saga ‘The High Republic’
MoviessponsoredFebruary 26, 2020