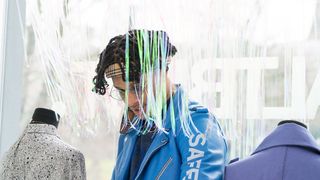 Though relatively new to the scene, Sydney Wyatt have quickly established themselves as boundary-breakers. The London-based collective operates in a variety of disciplines, counting producers, rappers, singers, painters, photographers, videographers, directors, and models among their ranks. So it makes sense that for their latest single and video, they superimposed their organized chaos into the world of Berlin’s streetwear scene, occupying the boutique retail store Studio 183 for the wild “Swagie.” Watch its world premiere above.

“Swagie” was engineered by Sydney Wyatt’s impresario Peter Xan, set to appear on the collaborative tape Vanity Vibes, made with trap producer Ben Jamin. Fans of the group will be able to catch them play the track live in-store at Studio 183 this Saturday, May 5, making for an incredible life-imitates-art launch party. Head here for more info on how to attend.

For more of our premieres, take a look at the new single from London’s Team Salut, “Buss It Up,” right here.

How ‘Gears 5’ & AAPE by *A Bathing Ape Are Bridging the Gap Between Streetwear & Gaming
Video GamessponsoredAugust 30, 2019