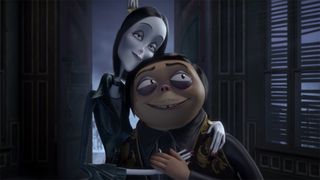 They're creepy and they're kooky, mysterious and spooky. #MeetTheAddams in theaters this Halloween 🕷🖤 pic.twitter.com/OpP7o9N9yy

Theron and Isaac voice Morticia and Gomez Addams, while Chloë Grace Moretz and Stranger Things‘ Finn Wolfhard portray their children, Wednesday and Pugsley. Rounding out the cast is Nick Kroll, who plays Uncle Fester, and Bette Midler, who voices Grandma.

This year’s The Addams Family finds the whacky Addams preparing for a large family function. All the while, the family is forced to coexist with a reality TV host, Margaux Needler (played by Allison Janney), who is obsessed with suburban perfection.

Press play above to get your first look at 2019’s The Addams Family, which is due out in theaters on October 11.

I absolutely LOVE being apart of this iconic family. Thank you @meettheaddams for asking me to be your Morticia! My kiddos can’t wait!!! #MeetTheAddams pic.twitter.com/YYGZAnuvLP

In other news, check out our take on Supreme’s unexpected collaboration with Jean Paul Gaultier below.

The Twisted Trailer for Netflix’s ‘Fractured’ Sends Sam Worthington on a Panicked Search for His Family
MoviessponsoredSeptember 20, 2019
What To Read Next
Load More
Search Results
Load More