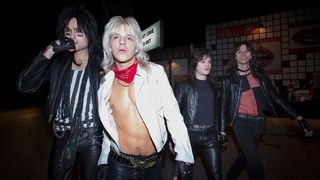 Netflix just dropped the official trailer for The Dirt, Jeff Tremaine’s take on the Mötley Crüe biopic, and it’s an express trip back in time to the wonderful world of ’80s glam metal. Machine Gun Kelly stars as Tommy Lee alongside Douglas Booth (Nikki Sixx), Iwan Rheon (Mick Mars), and Daniel Webber (Vince Neil). Pete Davidson plays the part of record executive Tom Zutaut whose claim to fame was being the A&R for Guns N’ Roses.

The film is based on the true story depicted in the band’s 2001 autobiography The Dirt: Confessions of the World’s Most Notorious Rock Band. As expected, the soundtrack will include Mötley Crüe songs. The Dirt will be available to stream starting on March 22. Watch the full trailer above.