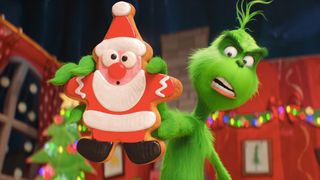 In a random turn of events, Tyler, the Creator took to Twitter not to drop a one-off track, but to deliver a special surprise. Apparently, the artist was tapped to make music for The Grinch, the latest film adaptation of Dr. Suess’ beloved book known as How the Grinch Stole Christmas. One of his original jingles called “I Am The Grinch” can be heard in the new trailer that was released for the Yarrow Cheney and Scott Mosier-directed movie which stars Benedict Cumberbatch. The theme song is a collaboration with composer Danny Elfman who also wrote the score.

Deadline recently revealed Pharrell Williams as the narrator for the animated film as well. The Grinch officially premieres in theaters on November 9. Listen to a snippet of the song while you watch the full trailer above.

In other news, Netflix announced that a live-action ‘Avatar: The Last Airbender’ series is in the works. Get all the details right here.

Tyler, the Creator Drops Trailer for Second Season of ‘The Jellies’
MusicsponsoredMay 10, 2019

Watch Pharrell Bring Out JAY-Z, Tyler, the Creator, Snoop Dogg & More at Something in the Water
MusicsponsoredApril 28, 2019