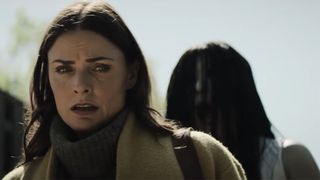 As we are just days away from Halloween, Sony Pictures takes the time to premiere the official trailer for 2020’s The Grudge, directed by Nicolas Pesce and produced by Sam Raimi. The upcoming film is not a reboot or a remake. It is merely a continuation of the horror series that begin with the 2004 movie of the same name, starring Sarah Michelle Gellar.

The Grudge is based on Takashi Shimizu’s Ju-On: The Grudge, as it follows a single mother and young detective who responds to a call about a suburban house that she soon learns is cursed by a vengeful ghost. All those who enter the home are destined for a violent death, so the detective must run to save not only herself, but also her son, from demonic spirits.

Andrea Riseborough, Demián Bichir, John Cho, Betty Gilpin, Lin Shaye, and Jacki Weaver star in The Grudge. With a screenplay by Nicolas Pesce and story by Pesce and Jeff Buhler, the horror movie comes to theaters in the US January 3.