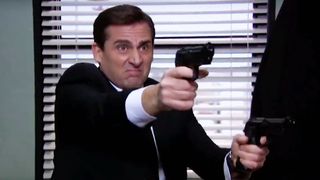 After years of waiting, The Office fans have finally been treated to Michael Scott’s Threat Level Midnight in its entirety. Steven Carrell’s character originally premiered the amateur action movie for the Dunder Mifflin gang in season seven, episode 17. Now, producers have finally blessed us with the film.

The epic visual tells the story of secret agent Michael Scarn aka Michael Scott, who goes up against Goldenface aka Jim Halpert (John Krasinski) to stop him from killing seven hostages and blowing up a NHL game at the behest of the President aka Darryl Philbin (Craig Robinson).

Watch the madness unfold in full via the video up top.

This ‘The Office’ Reunion Is the “Good News” We All Need
MoviessponsoredMarch 30, 2020

and Wander & Salomon Drop Another Hiker Fit for the Office
SneakerssponsoredMarch 17, 2020

thisisneverthat Delivers an Understated Take on the New Balance 827
SneakerssponsoredMarch 31, 2020
What To Read Next
Load More
Search Results
Load More