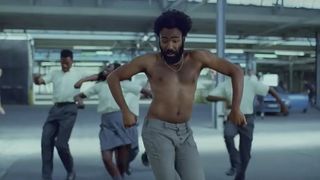 Last week, Donald Glover aka Childish Gambino captivated the internet with the release of “This Is America” and its accompanying music video directed by Atlanta collaborator Hiro Murai.

The four-minute clip sees Gambino and a group of dancers parading around a warehouse as chaos ensues all around. Viewers and writers have debated the deeper meanings of the video’s imagery, specifically its critique of the U.S.’s current political climate in relation to black American culture, racism, and gun violence (more on that here).

Despite such weighty and sensitive topics, YouTube channel LOTI has offered a new spin on the song through a parody mashup with Carly Rae Jepsen’s pop-smash “Call Me Maybe.” As seen in the videos above and below, Gambino’s track has been replaced with the 2012 viral pop hit, syncing perfectly with the rapper’s expressions and dance moves.

Naturally, the clip has already made the rounds on Twitter, with users’ opinions divided.  Some saw the humor in the parody, creating versions of their own featuring Britney Spears’ “Toxic” and Earth, Wind & Fire’s “September.”

Childish Gambino's "This is America" video over Toxic by Britney Spears.#ThisIsAmerica pic.twitter.com/0JpHtykXom

Only a matter of days for a viral satirical video featuring a Jim Crow reference dance synced with other tracks. But who says not to a timeless #earthwindandfire track? Video credit: kmlkmljkl #september #thisisseptember #donaldglover #childishgambino #ThisIsAmerica pic.twitter.com/lRYABqcOIG

Others were less impressed, calling the mashups “disgusting” and “shameful”, suggesting the parodies are in “poor taste” given recent discussions on the video’s wider cultural relevance.

The call me maybe/#ThisIsAmerica dub is disgusting, shameful, and in very poor taste. This is exactly what that song is about. Not a good look for those who are sharing it. This isn’t about being woke. It’s about stopping for once to listen to those who are hurting. Being human

That mixing Call Me Maybe with This is America shows me that white folks don't listen. This is America was for y'all asses. He basically gave you the answers to the test and y'all dumb asses still failed.

What are your thoughts on the parody — funny or in bad taste? Drop a comment below to let us know.

In related news, this video breaks down the lyrics to Childish Gambino’s “This Is America.”

Donald Glover Gave Away His adidas Sneakers for Free Via AirDrop at Coachella
MusicsponsoredApril 13, 2019