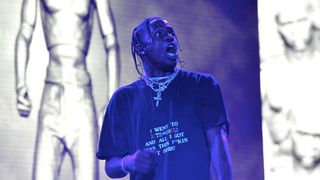 This past weekend marked the annual NYC Governor’s Ball, with Travis Scott making his first headline performance at the festival. Despite balmy weather, fans turned up in their droves to see the Houston rapper deliver an explosive set, which included a sneak peek of what’s to come on Astroworld.

Complete with pyrotechnics, Scott jumped out on stage and opened the set with the unreleased track “Stargazing.” The song, which is equal parts autotune and hype, discusses the impact of psychedelics and saw the rapper hop around manically on the raised platform.

Always dressed to impress, Scott can be seen decked in an official Astroworld merch T-shirt, Air Jordan IVs, and the much loved Evisu pants. Naturally, a number of iced out chains and a watch also made an appearance.

In regards to the album, Scott also dropped a few golden nuggets on its progress. “I take time on the album,” he told the crowd. “Just [to] make sure the album is like, tight as f***.” He also confirmed he was building an amusement park for the arena tour, citing “I’m trying to create the ultimate experience […] and every night on tour, it’ll best f***ing ride of your f***ng life. ”

In regards to a release date, Scott kept fans on the edge: “It’s coming. Sooner than you think.”

Sadly, there’s still no official word on when Astroworld will officially drop, but till then, you can check out Scott’s performance above and read everything we know about the record so far, here.

Be sure to also check out how Twitter reacted to Travis Scott’s recent NBA performance.

In related Governor’s Ball news, Pusha-T took to the stage and performed “The Story of Adonis” and fans got hyped-up.

An Exhaustive Timeline of the Most Important Dates in Music Merch History
MusicsponsoredNovember 11, 2019
Follow
Highsnobiety Music
What To Read Next
Load More
Search Results
Load More