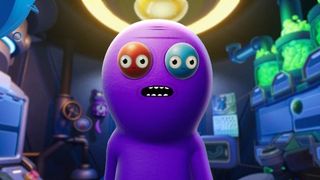 Playstation Europe has just dropped a trailer for Trover Saves the Universe, an upcoming VR game by Rick and Morty co-creator Justin Roiland and his newly launched Squanch Games studio. Similar to Rick and Morty, the game takes place in a fictitious world that is filled with silly humor, courtesy of Roiland’s voice performances.

As shown in the trailer, you portray as a member of an alien species that sits in a chair at all times. An evil beaked monster named Glorkon eventually kidnaps your dogs and stuffs them into his eyes, allowing him to gain incredible power which he needs to destroy the universe. However, it’s all up to you in order to stop him before it’s too late and save the universe in this bizarre comedy adventure.

HOLD ONTO YO BUTTS!
Out May 31st on PlayStation 4 and June 4th on PC
👉Pre-Order Here: https://t.co/PGrgoxB202https://t.co/cTTC4gFABe

The trailer also reveals the video game’s release date, so you can expect Trover Saves the Universe to be available beginning May 31 for PS4 and PSVR, then June 4 for PC. You can also pre-order the game now and get 10% off.

‘John Wick’ Is Getting Its Own Strategic Video Game
MoviessponsoredMay 9, 2019
What To Read Next
Load More
Search Results
Load More