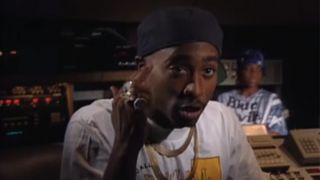 An MTV News clip from 1992 shows the late Tupac Shakur explaining his views on generosity and responsibility in the wake of the Los Angeles riots. In the interview, Shakur uses the then TV personality and real estate mogul Donald Trump as an example of the consumer culture of the early ’90s. Take a look at the clip above.

“Everybody is taught at school if you want to be successful, you want to be like Trump, it’s all gimme gimme gimme, crush crush crush,” he says. The rapper is essentially advocating for greater social unity to overcome the racial wealth gap. He explains, “No independent person was born and just grew up independent. You worked and you learned teamwork and cooperation and unity and struggle and then you became independent. We have to teach that and instill that.”

The interview is particularly prescient given that last week the debate around the case for reparations entered the halls of Congress. In the interview, Tupac said, “There’s no way that these people should own planes when people don’t have houses, apartments, shacks, drawers, pants.” When the interviewer asked, “Even if you earned it?” the rapper responded, “you still owe.”