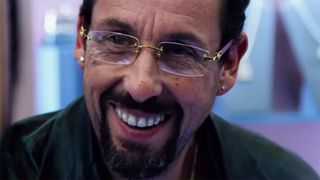 Sandler portrays Howard Ratner in the crime-drama, a New York City jewelry dealer to the rich and famous, with clients that include Kevin Garnett and The Weeknd, both of whom play themselves in the movie. Ratner’s world is turned upside down when he makes a series of high-stakes bets that could ultimately impact his business as well as his family.

‘Uncut Gems’ Is the Runway Show of the Decade
StylesponsoredDecember 24, 2019

FRONTPAGE
Meet Julia Fox, the Diamond in the Rough From ‘Uncut Gems’
StylesponsoredDecember 11, 2019

How A24 Turned Screenplays into Grails
In-DepthsponsoredNovember 7, 2019
What To Read Next
Load More
Search Results
Load More