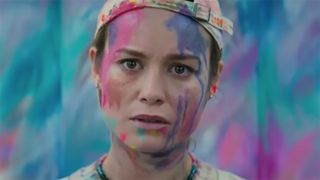 Brie Larson is already having one hell of a 2019. Following the record-breaking success of Captain Marvel, the 29-year-old actress will also star in next month’s Avengers: Endgame. Ahead of the premiere of Avengers: Endgame, however, Larson is set to release her directorial debut, titled Unicorn Store.

So excited to share the trailer for Unicorn Store, @brielarson's directorial debut and an absolutely charming, heartfelt, exploration of the things that drive us and the creativity that adulthood often tries to extinguish. pic.twitter.com/1nLqX8DJ3r

Unicorn Store will release on Netflix, following the film’s debut at the 2017 Toronto International Film Festival. Larson not only directs, but also stars in the picture alongside none other than Samuel L. Jackson.

Larson’s character is an aspiring painter who is forced to take a nine-to-five job in order to make ends meet. Noticeably miserable with her office employment, things begin to look up when she is blessed with the opportunity to fulfill a childhood dream of adopting a unicorn.

In addition to Larson and Jackson, Hamish Linklater, Joan Cusack, Bradley Whitford and Mamoudou Athie feature in Unicorn Store, which comes to Netflix on April 5.