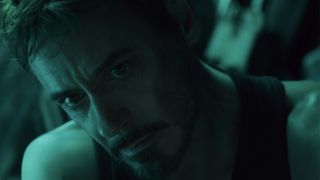 A new 30-second TV teaser for Avengers: Endgame has just dropped. “Honor” pays tribute to the heroes who disintegrated at the end of 2018’s Avengers: Infinity War following a snap of Thanos’ Infinity Gauntlet-ed fingers.

The clip begins with footage of the fallen in black and white, with flashes of red the only other color present. Over low-key swells of music, the mantra of the most recent trailer is repeated, the Avengers declaring they will do “whatever it takes” to undo Thanos’ atrocities. Watch the teaser above.

Marvel has also revealed the movie’s synopsis: “The grave course of events set in motion by Thanos that wiped out half the universe and fractured the Avengers’ ranks compels the remaining Avengers to take one final stand in Marvel Studios’ grand conclusion to 22 films, Avengers: Endgame.”

The final chapter of the MCU’s “Infinity Saga” is out on April 26.