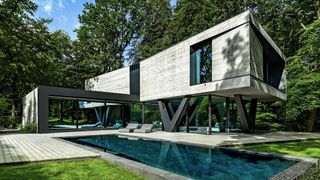 Querkopf Architekten describes the Villa NEO, nestled in a forest in Hamburg, Germany, as like “a sculpture carved out of stone.” Take a look through the new structure in the video above.

The two-storey villa’s many features are, however, unequivocally contemporary. From the floor-to-ceiling window elements that create sleeping areas the feel as if they are in the forest to large slats of steel which wrapped around the airspace in the middle of the house, Querkopf has created a sculptural, modern villa that feels integrated with its natural surroundings.

D’Angelo’s ‘Voodoo’ at 20: Artists Reflect on the Greatest Neo-Soul Album Ever Made
MusicsponsoredJanuary 28, 2020