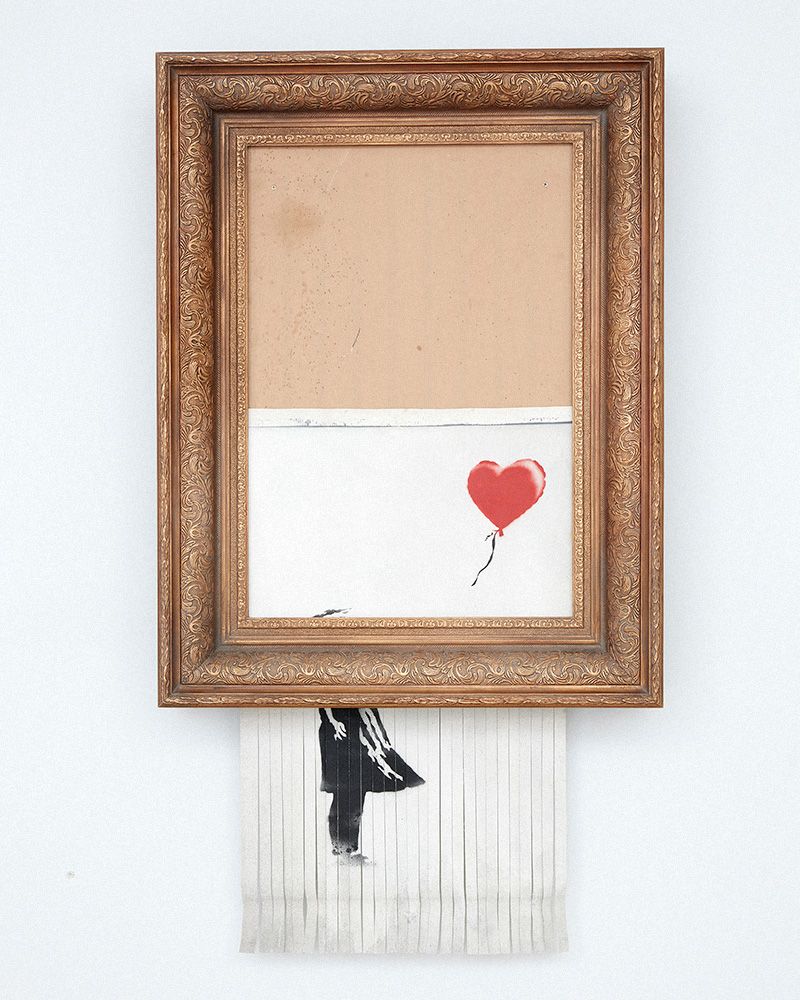 He’s anonymous, and yet, his stenciled graffiti art and its related exploits are known, seen, and criticized the world over. Banksy is one of the best-known living street artists without actually being known. His identity remains a mystery—albeit with a few educated guesses made throughout his career—but his work, which can pop up unannounced on streets, walls, and bridges just about anywhere, is iconic for its passionate anti-establishment socioeconomic and political themes.

Banksy is based in England, but aside from that and a brief physical description of him from a 2003 face-to-face interview with The Guardian, not much else is known about Banksy, the person. His long-running escape from the spotlight has only made it burn brighter, and to that degree, it’s made his art more compelling. It’s allowed the “Banksy effect” to take over and revitalize street art. And instead of focusing on the man behind the art, Banksy’s art speaks for him, building the shadowy portrait of a character determined to affect social change with counter culture ideals, some stencils, and cans of spray paint.

Starts out as a freehand graffiti artist as part of a Bristol artist collective called DryBreadZ Crew.

Paints his first known large mural, The Mild Mild West, over the advertising for a former solicitors’ office in Bristol. The mural depicts a teddy bear throwing a molotov cocktail at riot police.

Decides to stencil his art after realizing how much less time it takes to complete a piece of work.

Takes a trip to Palestinian territories and paints nine images on the Israeli West Bank wall.

Holds an exhibition called “Barely Legal” in Los Angeles, which takes place in an industrial warehouse featuring a live “elephant in the room” painted in an elegant pink and gold floral pattern to draw attention to the issue of world poverty. He also paints Queen Victoria as a lesbian, and the original work plus two prints is bought by Christina Aguilera for £25,000. The phrase “the Bansky effect” is coined by journalist Max Foster to show how Bansky’s rise helped support and create interest in other emerging street artists.

A new record high for Bansky’s artwork is set at £288,000 when an auction house sells his Space Girl and Bird painting.

The “Banksy vs Bristol” art exhibition debuts at the Bristol City Museum and Art Gallery featuring over 100 works of art and 78 new works. Over the course of the twelve-week exhibition, it’s visited over 300,000 times.

Premieres his first film Exit Through the Gift Shop at Sundance Film Festival. The documentary intimately tells the story of Thierry Guetta, a French immigrant living in Los Angeles who goes from being obsessed with street art to becoming a street artist himself.

Exit Through the Gift Shop is nominated for a 2010 Oscar for Best Documentary Feature.

Does a one-month residency in New York City called Better Out Than In, each day unveiling a new piece of art in a different location around the city.

Opens Dismaland, a show built and modeled as a “bemusement park” lampooning themed attractions in the UK.

One of his pieces Balloon Girl sells at auction for £1.04 million, but upon its sale, an alarm sounds inside the picture frame and the canvas is passed through a shredder hidden inside the frame, destroying the work. The shredded work is sold to the bidder and given a new title, Love is in the Bin. The auction house declares it as “the first artwork in history to have been created live during an auction.”

Right now, there are three theories to Banksy’s identity, each concerning a different person. To many, he’s believed to be an English man named Robin Gunningham, born in 1973 just outside of Bristol. Former associates and classmates of Gunningham have corroborated this, and a 2016 study of the locations of Banksy’s artwork in connection with known addresses of Gunningham’s seemed to confirm this rumor to some scientists.

For the 2016 study, scientists at Queen Mary University of London used geographic profiling—a technique used to catch criminals—to “catch” Banksy. These scientists selected 140 suspected Banksy works in London and Bristol to build a geoprofile of the artist. The location of these selected works suggested clusters of “hot spots” that were narrowed down to pinpoint Banksy. Those hot spots centered around a pub, a playing field, a residential address in Bristol, and three addresses in London. Then, using publicly available information, the researchers concluded that all the locations were either Banksy’s haunts or living spaces.

Another guess at Banksy’s identity was done by a forensics expert in London who found that a “J Hewlett” is associated with every company that’s known to be connected to Banksy and his produced works. He picked up on the trail by going through Companies House, a site that registers company information for the public, finding that “J Hewlett” is the ultimate owner of all Banksy companies. That “J Hewlett” is thought to be English comic artist and Gorillaz founder Jamie Hewlett—a guess that was shot down by Hewlett’s publicist, but given the available evidence, plus the fact that Banksy’s artwork appears in a Gorillaz music video, who’s to say this London expert is wrong?

The third rumored Banksy is English artist Robert Del Naja aka 3D, the frontman for the band Massive Attack. He was a graffiti artist himself in the ‘80s, and is a confirmed personal friend of Banksy. May he actually be Banksy himself? Perhaps, especially because the appearance of some of Banksy’s murals and Massive Attack tour stops have coincided. Either way, it’s just another educated guess into Banksy’s true identity.

Why does Banksy hide his identity?

Graffiti art is illegal and considered vandalism to law enforcement and public officials, so to avoid legal scrutiny, Banksy must conceal his identity to continue his work.

According to The Guardian’s 2003 interview, Banksy is described as “white, 28, scruffy casual – jeans, T-shirt, a silver tooth, silver chain and silver earring. He looks like a cross between Jimmy Nail and Mike Skinner of the Streets.”

Where can I see Banksy’s artwork?

So much of Banksy’s work can be found around Bristol, London, and a host of other English cities, but his graffiti murals also cover walls in New York, Jerusalem, Amsterdam, Melbourne, San Francisco, Toronto, Los Angeles, New Orleans, Chicago, and Bethlehem.

These Are the Best BE@RBRICKs to Buy Right Now
DesignsponsoredSeptember 13, 2019

Few Banksy Books Are Authorized, But Rizzoli’s New One Is (Kinda)
CulturesponsoredMay 11, 2022

Unauthorized Banksy Exhibition Is a Little Too Light on Original Works
Art & DesignsponsoredAugust 29, 2021

Banksy Might Have to Reveal His Identity to Own His Art
Art & DesignsponsoredJune 21, 2021

Banksy Will Always Be Bigger Than His Art
Art & DesignsponsoredMarch 24, 2021
Load More
Highlights