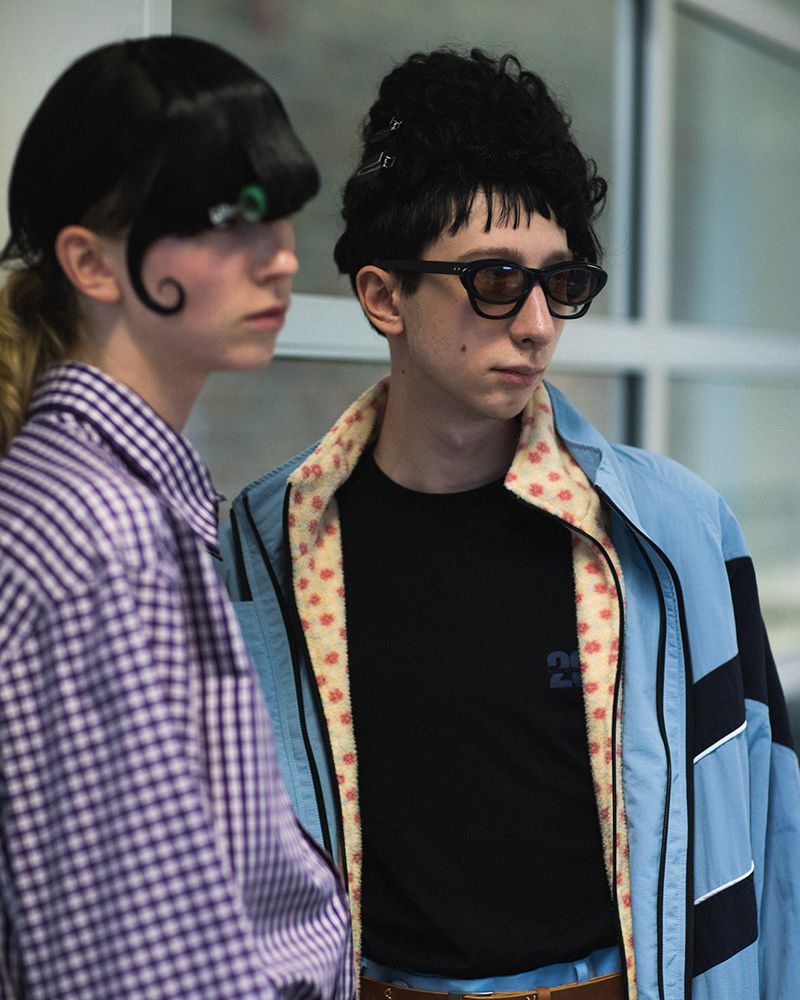 She calls herself “probably the best designer in the world,” and given her work and influence, she’s probably not wrong. Now reaching new heights as one of the world’s menswear leaders in normcore—an aesthetic she’s always brought to her designs, despite the recent trend—Martine Rose and her eponymous label consistently takes the banal and ordinary aspects of the past and remixes them to her one-of-a-kind taste, giving her clothes a thrifty-yet-new, boxy-yet-proportionate style. Raised in South London, she’s influenced by ‘90s rave, reggae, and hip-hop culture, directly importing her lived experiences into her work. By exploring how retro stylings and particular subcultures can be merged with everyday British wardrobe choices like technical jackets, sweatsuits, and white-collar workwear, she’s created an entirely new lane for herself, her brand, and the everyman.

Founds her own namesake label, which starts out as just a men’s shirting brand.

Collaborates with Steve Terry of Wild Life Archives for sewn-on patch designs in her autumn/winter collection.

Collaborates with Napapijri for a line called Napa by Martine Rose. The collection is critically acclaimed, reinterpreting Napapijri’s silhouettes into a refreshing and fascinating range of oversized cuts with big, bright boxed colors.

Collaborates with Nike on a small capsule collection pitting everyday athletic wears against a professional athlete’s sizing. Also collaborates with MYKITA for a set of ‘90s dance-inspired eyewear.

Collaborates with MYKITA on another collection of nostalgic eyewear. Her collaboration with Nike releases.

Show
What’s the story behind Martine Rose’s collaboration with Nike?

Debuting in 2018 but released in early 2019, Martine Rose did a small capsule collection with Nike, which included a multicolored tracksuit and her own pair of Nike’s Monarch sneaker—an outfit that, under normal circumstances, would be befitting of a middle-class American dad. Rose, however, wanted to take “the ordinary and make it extraordinary.” For the collection, she studied basketball player’s bodies and feet, and executed her designs based on how she imagined a basketball player’s tracksuit and sneakers would fit her body. The results are oversized, bulky forms and shapes with bright colors and her uniquely retro feel.

Martine Rose Is Bringing WFH Outfits to the Office
CulturesponsoredFebruary 23, 2022

Sponsored Story
10 of the Best Light Sweaters to See You into Summer & Beyond
StylesponsoredFebruary 7, 2022

Can You Find the Vintage UK Sportswear References in Martine Rose Fall 21?
StylesponsoredJuly 6, 2021

This Month’s Best Luxury Fashion Includes Some of the Season’s Best Shades
SelectssponsoredJune 28, 2021

Sponsored Story
10 Slip-Ons Because Who Has Time For Laces This Summer?
SelectssponsoredJune 18, 2021

Martine Rose’s Open-Toe Loafer Is for the Most Extreme MuleBoyz
SelectssponsoredApril 28, 2021